Good News: This amazing 13-year-old is from near where I live, and what a piece of good news this is. Shubham Banerjee created a Braille printer out of Lego pieces for a school science project.

After researching Braille online and discovering that printers for the blind cost $2,000 or more, he set out to create one that was less expensive.  He has already received financial backing from Intel Corp to start his own company.


The Great and Powerful A to Z Theme Reveal Blogfest!

Sign-ups for the 2015 A to Z Blogging Challenge are already under way. If you have done it before, you know how much fun it is (good for you!) and if you have not, this is your chance to give it a try! You can sign up to participate here.

One of the most burning questions participants ask themselves every year is:

“Should I have a theme?“

Themes are not mandatory, but definitely fun. They let your visitors know what to expect, and help you create posts that line neatly up from A to Z. They also have an added bonus: They let you participate in a whole separate blogfest!

Two years ago A to Z participant Mina Lobo started the Theme Reveal, and we thought it was such a great idea that we made it tradition. It’s now our very own, grand and festive way of rolling out our themes together!

Here is how the Theme Reveal Blogfest works:

Sign up on the Linky list below, and on March 23rd (Monday) publish a post on your blog in which you reveal your theme, tell us why it’s exciting, and give us a hint of what to expect from it! Then, once your post is up, use the Linky to visit all the other blogs announcing their themes. Enjoy!

This is a great opportunity for all of you to get a jump start on your A to Z experience. You can link up with fellow bloggers, scout out and bookmark themes that you look forward to, and set out delicious themed bait on your blog to lure in wandering participants! This way, by the time the frenzied posting begins on April 1st, you will already have an audience eagerly awaiting your posts.

Michael
Path of Angels Book One

Add to your Goodreads shelf

There is only one path.

Born mortal along with his three brothers, Michael is an Archangel with a specific role: hunt fallen angels and send them back to Hell. He is determined in his mission, never straying from his appointed path, until he meets Lake Divine, and discovers there may be more to his beliefs than blind duty.

But Lake is not who he seems. Offspring of a human and a fallen angel, a Nephilim, Lake must choose his own destiny: give in to the coldness and embrace the dark, or seek the light and rise above the sins of his father.

Two paths lay before them, but only one has the potential to destroy them both.

Patricia Josephine never set out to
become a writer. In fact, she never considered it an option during high school and
college. But some stories are meant to be told and this one chose her. Patricia
lives with her husband in Michigan, hopes one day to have what will resemble a
small petting zoo and has a fondness for dying her hair the colors of the
rainbow. 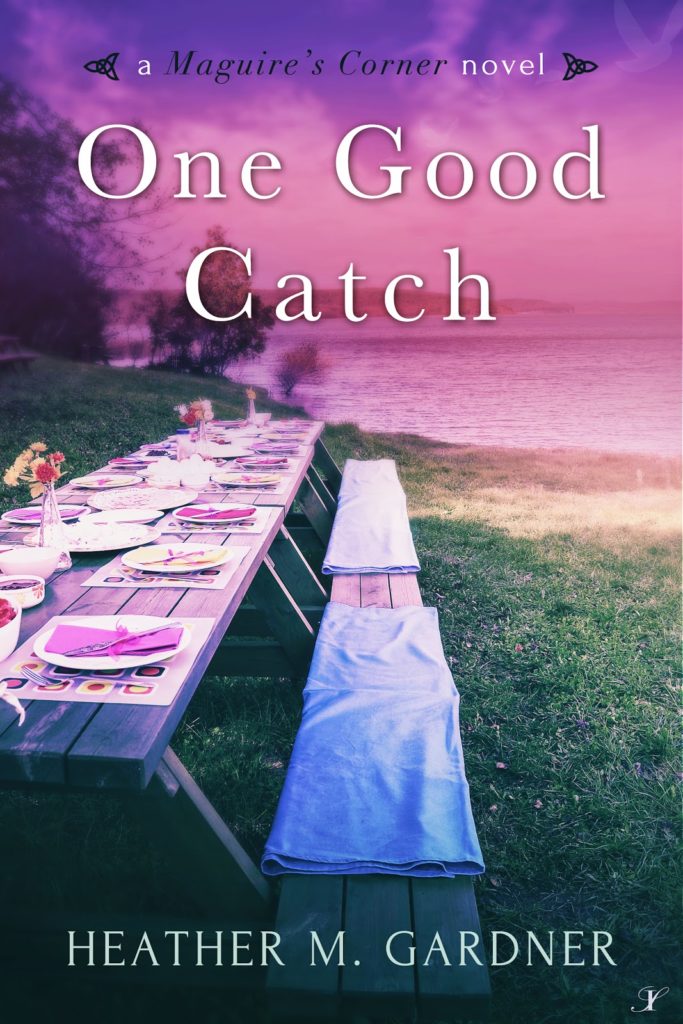 Title: One Good Catch
Author: Heather M. Gardner
Genre: Contemporary Romantic Suspense
Publisher: InkSpell Publishing
Cover Design: Najla Qamber Designs
Release Date: March 13, 2015
~~~)
Ignoring a recent trauma that is affecting her everyday life, ER Doctor Kate Maguire engages in some high risk activities, but putting herself in these dangerous situations isn’t enough to feed her edginess. She needs something more. When her brother’s high school best friend comes back to town, it’s her chance for a ‘no strings attached’ fling with the man who still headlines in all her best dreams.

Rhys MacGrath’s days of one-night-stands are long over. The pro-football player might be side-lined at rehab for a shoulder injury, but that doesn’t mean he can’t admire and desire the all-grown-up, so-damn-hot, version of the tomboy he once knew. His sudden interest in Kate might be aggravating his best friend, who doesn’t approve, but it’s her indifference that’s driving Rhys crazy.

Everything heats up when Kate’s nosy nature sets her in the line of fire of an arsonist forcing them to deal with more than just the sparks igniting between them.

~~~)(~~~
Heather M. Gardner’s love of books began on the hand-woven rugs of her small town library where her mother worked. There she had a never-ending supply of stories to read at her fingertips. As a teen, her favorite genres to curl up with were romance and mysteries. When she started to create her own stories, they were the perfect fit.

Heather resides in New York with her best friend who is also her husband, plus her talented and handsome son. She is currently owned by four stray cats. Heather’s a full-time mom, works part-time from home, a chocolate enthusiast, coffee junkie, cat addict, book hoarder and fluent in sarcasm.

Blog: The Waiting is the Hardest Part
Twitter: @hmgardner


Quote of the Day: “A champion is someone who gets up when he can’t.” Jack Dempsey.