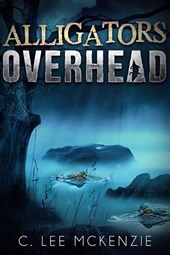 Book #1 in the Adventures of Pete and Weasel

Listen to the The Book Club Radio Program Podcast

Come in and meet Pete Riley before it’s too late—before he loses the battle to his control mysterious powers—before a swamp alligator or a town witch does him in.

McKenzie pens a swampy middle-grade story full of humor, hauntings, quirky characters and a mystery that continues to develop to the very end. Twelve-year-old Pete is a small-town kid prone to mischief and trouble. Luckily, his best friend, Weasel, attempts to keep him in line. But when Pete develops a mysterious supernatural power that allows him to make anything he imagines come true, he’s in for some trouble that even he finds difficult to handle. Pete’s aunt knows a bit more about these powers than Pete; she’s convinced he has inherited traits and abilities in witchcraft from his ancestors, something she’d never told him, fearful that he wouldn’t comprehend how to harness his powers at such a young age. As Pete develops an understanding of his new talents, he searches for a way to use them wisely, with Weasel acting as a voice of reason and fully committed to staying by his side. While the themes and plot are certainly based in fantasy, the nature of Weasel and Pete’s relationship is grounded in reality and will be recognizable to young readers who’ve begun to understand the importance of compromise, healthy conflict and teamwork. As the two work together to save the day and solve the biggest mystery their town has ever encountered, they also learn about each other and their own powers to make good choices. In its twists, turns and surprises, the novel reads quickly and should keep the attention of any young middle-grade reader. With fresh language, loads of perky dialogue and unpredictable characters such as witches and talking alligators,McKenzie spins a tale that isn’t just entertaining; it also offers valuable lessons, as the cast of strange characters bond around common goals: save their swampland and deter a crisis. The folksy diction and lyrical, verb-heavy storytelling will leave readers turning the pages all the way to the end, where big surprises await and the real villains are revealed. A short, fun story that will excite both young and old imaginations. 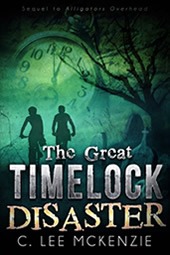 Book #2 in the Adventures of Pete and Weasel

Becoming a wizard is hard work. For Pete Riley it’s almost impossible. He tries to follow the rules, but he’s impatient and being impatient only leads to trouble.

He messes with a time spell when he shouldn’t and he and his bookish friend, Weasel, are swept into Victorian England, where they will be trapped forever if that wizard-in-training can’t find a way to reverse his bad spell by the next full moon.[/su_column][/su_row] 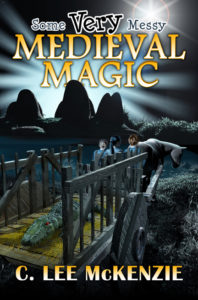 Book #3 in the Adventures of Pete and Weasel

Pete and his friend Weasel thought they’d closed the Time Lock. But a young page from medieval times, Peter of Bramwell, goes missing. His absence during a critical moment will forever alter history unless he’s found.
There’s only one solution – fledgling wizard Pete must take the page’s place. Accompanied by Weasel and Fanon, Pete’s alligator familiar, they travel to 1173 England.

But what if the page remains lost – will Pete know what to do when the critical moment arrives? Toss in a grumpy Fanon, the duke’s curious niece, a talking horse, and the Circle of Stones and Pete realizes he’s in over his young wizard head yet again… 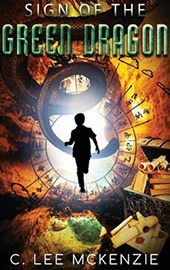 San Francisco Review of Books says: Lee’s graceful prose style is sophisticated enough for adult readers and the story is such that it provides a terrific escape for a summer’s vacation read – if you can abscond it from the middle age audience for whom it was written. A solid hit, this. Read More

Three plucky sleuths. A crumbling skeleton. A buried treasure.
After six months in a new school, Sam’s finally fitting in. He’s the one kid with enough talent to hit the winning home run and bring the baseball trophy back to Haggarty Elementary. But Sam’s guardian is shipping him off to boarding school before that can happen.

When his teammates, Joey and Roger, hear his bad news, they plot to hide him until the big game. Their secret cave is a perfect place until an earthquake shatters a wall and reveals a wooden chest with a red-eyed dragon carved into its top. Inside, a crumbling skeleton clutches a map with a cryptic note, promising treasure if the finder reveals the truth about an old murder and returns the remains of the victim to China.

Is the note a hoax? Maybe. But what does Sam have to lose? With Joey and Roger, he sets off to track down the clues and hopefully discover treasure. When finally some puzzle pieces start to make sense, they become lost in a labyrinth of underground tunnels, trapped by dangerous thieves and sealed inside an airless tomb.

Sign of the Green Dragon gets a high five for fantasy, fun and some fearsome adventure. If you like intrepid would-be knights on impossible and dangerous quests, you’ll love this story. As one reader says, this book, “has more twists than a dragon’s tail.”

I’m Ardo. I used to be a perfect turtle. I had this fabulously wrinkled neck and, my pals said, an adorable tail. My pace was adagio. If you don’t know, that means measured and slow. See? A perfect turtle. Then one day while I was on my warm flat rock sunning by my favorite pond, something with hard  steely fingers grabbed me. It slammed me into a dark  box and zoomed away so fast I rolled up inside my shell like a tennis ball. When the thing lifted me out of  the box, I was in a bright room and these round faceless pods with stainless steel skin hovered over me.
click to read Xyla2 Experiments

Casey glared at himself in the bathroom mirror, and with two fingers pulled each side of his mouth apart. “Oh man.” It was worse than yesterday when he’d looked in the dentist’s mirror at his braces for the first time. “I’m Frankenstein’s monster.” He could already hear the kids when they saw him at school.  Metal Mouth!  Iron Teeth! It was bad enough being called Chess Geek, but he was used to that, and, since he loved chess, chess geekdom didn’t matter so much.  His mom was eating crunchy buttered toast when he came in for breakfast. “How do you feel, honey?” She set a baked apple and a glass of milk in front of him. He shook his head, eyeing the toast. “A lot of kids have braces, and you’ll be glad to have those teeth straight.” “What difference does it make if my teeth are straight or crooked?” He bit into the soft apple flesh, closing his eyes, trying not to think of his teeth covered in those sharp steel bands. Every time he chewed, his teeth scraped the inside of his mouth and tingled with something like with a small electrical current.
click to read Lost At Devil’s Table

Adam was late. Mr. Swartz had kept him in detention an extra hour for passing a note, and it wasn’t even his note. He’d been between the twins, Zoe and Zia, doing a favor. He punched the air. Cranky old Swartz. He’d have to explain to his mom why he was late, and she’d ground him for the weekend. The seventh grade was turning out to be his worst ever school year. What he needed was a twin of his own to share the misery. Pulling his scarf across the bridge of his nose, he tugged his cap down. He was nearing the house that gave him the creeps, so he picked up his pace and tucked his chin down. As he came to the padlocked gate, he glanced through the iron bars. The thick woody stems of wisteria snaked around the four porch columns and winter weeds grew tall and spiky. He shivered. And that’s when he looked up and into a face peering down at him from a high window.
click to read The Ghostly Double

String Bean, String Bean he’s so lean. Leanest bean you ever seen. Jessie Bean ducked his head and walked fast. He wanted to get away from Jamal Brown and his buddies, Nick Jabowksi and Mike Chen. Every time they saw him, they sang that nickname song. Jessie hated them almost as much as he hated the way he looked. He was as tall as his fifth grade teacher, Miss Park, and he did look like a string bean, but he was tired of being kidded about it.
Click to read String Bean

Grandpa chunked a dirt clod with his shovel. “Now smooth out the patch with the rake, then make a nice straight row. We’re ready to plant.” Mia looked up, her eyes wide. “You heard right,” he said. “This year you do the planting.” For two summers Mia had helped, but Grandpa really did the important work, like making the rows. This was her chance to show him she could do the job right. She raked the ground level, then took the hoe Grandpa handed her and made the straightest row she could. With his hand shovel, Grandpa dug a hole bigger than her fist and gave her a plant. “Pack the dirt. Plants have to feel safe, so it’ll grow strong.” By noon they stood admiring a gaggle of cucumber plants. Gaggle was Grandpa’s word for a lot of something. “How come we aren’t planting tomatoes like before?” Mia remembered those sweet, juicy summer tomatoes. “We will, but we have to get cucumbers in first because this year we’re making pickles.” He licked his lips. “I love pickles, and you will too once you taste ours.” Mia tried to put on a happy face, but pickles and she didn’t go together, not one bit. They made her lips pucker.
Click to read Pickles

I’m Henry, and I’m here to set the record straight. I am a tuatara. I am not, I repeat, NOT, a lizard. I may resemble those guys, but I come from a different scientific order all together. Let me write the order phonetically– /spen-o-don-cha/ –spelled, Sphenodontia. There. Now I’m never to be confused with my cousins again, okay?
Click to read Henry is a Tautara

Stop! Don’t throw out that garbage. There are hungry worms waiting for dinner. The Red Wiggler is a special kind of worm. It doesn’t live in the ground, but it loves a cozy bin filled with kitchen scraps and shredded newspaper. In days it will reduce your garbage and those papers to a rich fertilizer ready to use in your garden. While the Red Wiggler chews up your banana skins and carrot peels, it also produces a dark brown juice called Worm Tea. Catch this juice, add it to your watering can, and wait for ordinary plants to become prize-winning ones.
Click to read Worm Tea