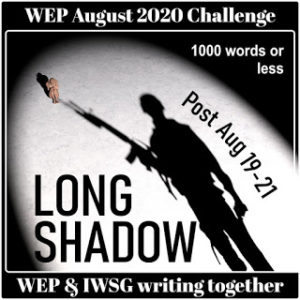 Sign Up And Enjoy the Excitement of Story Telling

I’ve always enjoyed slice of life stories and especially ones with quirky characters that leave me wondering about who they are really and what might happen to them after the story ends. I thought I’d have some fun and try to create one of those SOL stories of my own.

I’m not a fan of “respelling,” but I did some here because it seemed to fit and it was short, so I didn’t have to endure page after page of talkin’ and outta.

About the time the sun hits the top of the mountain–yep that’s the best time to set the trap. He’ll be comin’ from the east and won’t see a damned thing round the bend. By my calculation he”ll be just about smack under the Buzzard Tree and blind as a bat.

Duchane got himself duded up for the occasion. New hat and new hardware rope slung over his shoulder. Kenny Dumont brought his pa’s shotgun, but I know the kid don’t have the sense to aim the thing let alone pull the trigger. Before I left the house, I tucked my Bowie knife into its sheath just in case three against one with surprise on their side wasn’t good enough. Can’t never be too careful when you’re out to string a man up. I’m sure he won’t cotton to that idea at all.

“Gotta take a leak Bart. Here, you hang onto the rope.”

Duchane’s bladder’s about the size of a grape. I take the rope, but that means if that bugger comes while Duchane’s playing bear in the woods, I’ll have to change up the plan. I should’a called on Newt for this job. He might be seventy, but he’d pee his pants before he’d sabotage a planned attack like this one.

And sure as I’m my mama’s best boy, here comes that weasel Barney Treamont. I can tell the way he sits his horse, he’s already had a few hours at Josie’s Bar. Well, that there’s something else to make all of this a lot easier.

Treamont’s sort of leaning over his horse’s head like he’s having a heart to heart with her. Nice horse. It’ll be a good one for Nell. Kind of elegant looking, but gentle. Treamont was never a rider, so all his horses were good and broke to the saddle before he threw his leg over ‘em.

Where’s that Duchane? “Kenny.” I keep my voice low and motion the boy close. “We got to change up the plan. You take that side of the road. I’ll take this one. Don’t point that damned gun at anything you don’t aim to shoot.”

“Got it.” He crouches and makes it behind a boulder at the edge of the road about the same time Treamont comes around the bend.

The pinched-faced little weasel blinks into the glare, and I grab him by the leg and pull him off his saddle.

“What the…” He has a loud, kind of twangy voice that always grates on my nerves. Now that isn’t enough for me to want this waster gone. It’s for Nell that he needs his neck stretched.

She’s had a rough go from day one in this world. Her mama dead before Nell took her first breath. Then there’s the fact that she didn’t come with a head for doing much of anything except feed, water, and nurse animals. Nell could pull a dying filly onto her feet before any vet I ever called to the barn, and every cow gave her double the milk. She talked to ‘em and there were times I swear they talked back to her. That made it hard for people to understand her, and it made it darned hard for me to raise her proper. I done my best, but a girl who’s not right in the head is more than a handful for the likes of me.

Treamont’s squirming under my boot. His eyes got that panic in them, but I’m not sorry for what I’m about to do. Nell must ‘a had some of that panic when he did that thing to her. She never said, but when she forgot to close the hen house door that night, I knew she was hurting. Nell never forgot to care for our critters. They was her family.

I’ve got the noose around Treamont’s neck when Duchane clomps his way outta the trees. “I got his hands,” Duchane says like I need his help now.

Kenny’s aimed his pa’s shotgun at the sky, so the most he’ll shoot is a duck late to the marsh. But he’s forgot what he’s supposed to do.

“Kenny! Get. His. Horse.  Over here.” I’m used to handling slow thinkers, but today my patience is wearing thin.

“What are you doing?” Treamont’s sober enough to notice the itchy rope against his throat, but Duchane’s got his hands tied behind him, so all Tremeont can do is twist his head and shuffle his feet.

“We’re hanging you, Treamont. And because I’m a Christian sort of man, I’m going to do two things.” I hold up one finger. “I’m going to let you say a prayer to ask for forgiveness.” I held up the second finger. “And I’m going to tell you why you’re dying.”

My sheets aren’t as white a Treamont’s face. He looks downright bleached.

“I’ve done nothing to harm you, Bart McKinny.”

“That’s not what my Nell tells me.” Now, the truth is Nell talks about as much as a gnat, but I seen Treamont coming outta my barn, straw poking up in his hair. And I seen Nell follow him, her top done up so the buttons don’t match. I didn’t just fall off a turnip truck, and I can add up what I see real fast. “You de-filed my girl.”

No way did I expect Treamont was going to bend over laughing the way he did.

I’m about to give his scrawny butt a good kick with my boot when he straightens up and says, “Your Nell jumped me. But I’m not complaining. I was coming to you now to ask for your blessing. I want to marry Nell.”

If I was a thrashing machine, my gears would be stripped. My Nell married? There are miracles in this world. I size up Treamont again. Not much bigger around than a twig, a short neck that only just let the rope fit under his chin, a real disappointment in the man department, but he might be just right in the Nell husband one.

“Here, let me help you outta that rope contraption.” I tug the noose from over his head, and Duchane unties his hands. “I’d be pleased to give you my blessing, Treamont.”

I pat him on the back until his color’s more natural and Kenny finally leads Treamont’s horse under the Buzzard Tree. Treamont’s still kind of shaky, but he gets back up and rides away a lot faster than I ever seen him do before.

Me, Duchane, and Kenny stand there scratching our chins, kind of feeling the let down of not having Treamont’s lynching to talk about over our beer for the next twenty years.

But the sun disappears behind the next peak, and long shadows from the mountains creep across the Buzzard Tree. Those shadows remind me of a story about how revenge stretches across a lot of years always trying to even up a score.

“Probably wasn’t a good idea to do Treamont in,” I finally say. “How about we get some cold ones at Josie’s?