A real writer identifies her least memorable scenes and takes them out. Then a real writer scrambles to figure out what in the #!!% to do next.

I meant to blog this morning. It’s Thursday and that’s my second blog day of the week, Monday being the first. (My attempt at organization in 2010) Then I started this triage on my manuscript and kaboom. Suddenly I had a September event coming before a February one in the same year. I had the motivation for an action in Chapter 10 floating around in a different Chapter 15. It’s taken the day to sort it out, but I think the process worked.

Here’s what I did:  I took my least memorable scene and cut it, keeping only the pieces that I needed to maintain the threads I had going. Then I moved to my second least memorable scene and cut it. I repeated this process three times. In the end I put back one scene with a major rewrite and fitted the bits I needed from the other two into places where they were more effective. 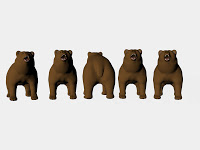 I’ve been on and on about what a “real does” when it comes to rewriting,  and today I have one more thing to add. A real writer knows where her butt is.