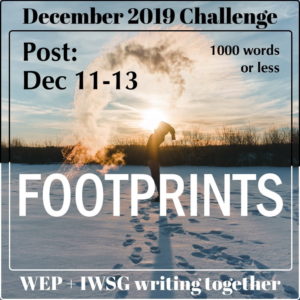 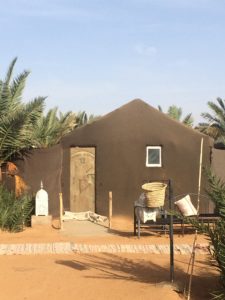 At four in the morning in a place called the Sahara, I pulled myself from bed and walked out of my camp into the starriest and most silent night of my life. I expected to meet several other travelers, but all of their camps were dark. I was sure they must have gone ahead. So I followed the carpeted trail to where we were to meet the camel drivers. The camels were there. The drivers were there. I was the one estranjero. 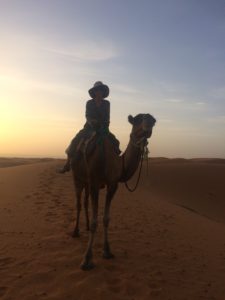 And so I went out across the soft, sandy breasts of the Sahara, the lone traveler from the other side of earth. It was Omar, his camel, and me—a strange company come together in this twinkling of starlight.

There are two things about this trek that were exquisite—the sense of unlimited space and silence.

The only sounds I could hear were my own breath, the soft crunch of the camel’s hooves into the sand and nothing more until…Anubis. 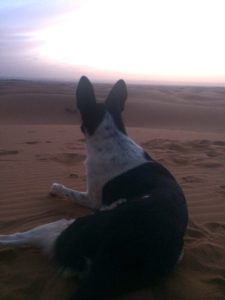 He came at a run from out of the dark. Ahead. Around. Behind. Unbridled canine joy. A Berber dog not to be left out of this new day soon to come 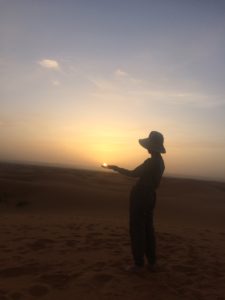 Getting on and off a camel is not something you do without some thought, but mine was smallish, and we agreed to a gentle rise and descent which suited him and me perfectly. While he nestled in the cool night sand, I trekked up to the top of the next dune and waited with Anubis for the sun god to arrive. And when he did, I held him in my hand, so grateful for his coming even if he dimmed the stars. 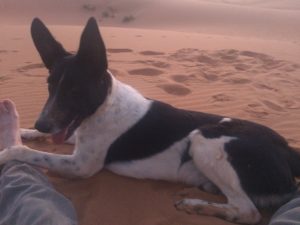 I was only there for a few hours, but those hours are millennia in my mind. I stood looking out over an ancient sea and into an infinite sky while Anubis laid his paw across my leg and we stared into the distance together.

On our trek back to camp, I looked over my shoulder. Our footprints—Omar’s, the camel’s, Anubis’s and mine had all crisscrossed this place, but the sand was already shifting in the stir of morning desert air. Soon those footprints would be gone and our brief time together would be erased, not even a hint of this remarkable experience would remain…except for here.