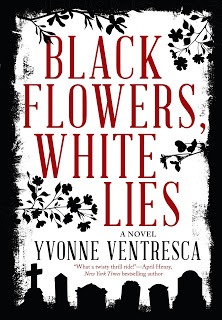 Indiebound | Amazon | B&N | AmazonUK | BAM
You’ll just have to imagine the drum roll, but I’m so excited to welcome my October Featured Follower, Yvonne Ventresca. She’s a special follower because she’s my critique partner and has been since the last century. Doesn’t that sound like a long time? But it’s true. We started writing together sometime in the 90s, but neither of us can remember exactly when. What’s fun is that each of us has mentored the other through our stories. We’ve come to know our characters like our own. If this writing journey has given me anything, it has given me great friends and Yvonne is one of them. Now here’s her next book. You’re going to love it.

My Email Connect peeps are in for a treat. Yvonne is offering an eBook to anyone in the world and the U.S. winner can choose eBook or a signed book.

Here’s the story in a nutshell: Her father died before she was born, but Ella Benton knows they have a special connection. Now, evidence points to his death in a psychiatric hospital, not a car accident as Mom claimed. When strange, supernatural signs appear, Ella wonders if Dad’s trying to tell her something, or if someone’s playing unsettling tricks. As the unexplained events become sinister, she finds herself terrified about who—or what—might harm her. Then the evidence points to Ella herself. What if, like Dad, she’s suffering a mental breakdown? Ella desperately needs to find answers, no matter how disturbing the truth might be.

Connect with Yvonne
Facebook | Twitter | Blog | Instagram | Pinterest | Goodreads
Yvonne Ventresca’s latest young adult novel, Black Flowers, White Lies was recently published by Sky Pony Press (October, 2016). BuzzFeed included it at the top of their new “must read” books: 23 YA Books That, Without a Doubt, You’ll Want to Read This Fall. Her debut YA novel, Pandemic, won a 2015 Crystal Kite Award from the Society of Children’s Book Writers and Illustrators for the Atlantic region.
Now segue into this month’s #InkRipples. At the heart of Yvonne’s book is a character who masks their identity. No one knows who that person really is. And when I found these masks, I thought they would be great at concealment and exciting to see.

#InkRipples is a monthly meme created by Kai Strand, Mary Waibel, and Katie L. Carroll. We post on the first Monday of every month with a new topic. The brains behind this meme are all authors, but you don’t have to be to participate. You can also spread your own ripples by blogging about the topic any day of the month that fits your schedule, just be sure to include links back to Katie, Kai, and Mary. 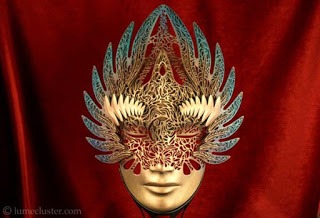 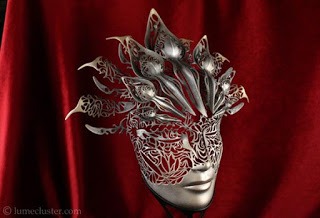 The artist behind these masks is Melissa Ng, the founder of Lumecluster. This company prints 3D masks like the ones here. I loved what Ms Ng says about masks, “There is so much more to masks than simply for concealment or disguise. In fact, throughout history and cultures around the world, many masks served as protection against evil or as an expression of the human spirit, perseverance, identity or transformation. With this in mind, I wanted to make a mask that defined our times and our increasingly global maker/entrepreneurial tribe. A tribe that believes in making a difference in this world. And a tribe isn’t complete without its mask, right?”

A perfect quote for this week’s post: “It’s not what you look at that matters. It’s what you see.” Henry David Thoreau

I have a bonus this week!  A new book from an Evernight Teen Pub Sister 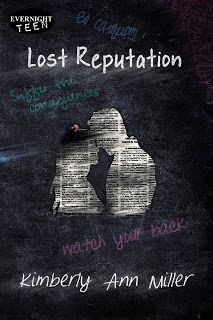 Casey Hayes has a secret—she writes
the conspiracy theory column for her high school newspaper. As the editor, she
thrives on the thrill of uncovering the facts—until she gets tangled up in a
scandal.
When she exposes a teacher’s shameful
secret, threats start, demanding she stop spreading the vicious rumors. Casey
blows it off and keeps on writing. Even sexy Victor Cruz, the hot senior with
the adorable accent who chases after Casey and tries to protect her, fails to
convince her to keep her mouth shut. But things only get worse as she ignores
the warnings, and soon, Casey must decide if exposing the truth is more
important to her than her life.
Buy Links:   Evernight
Teen    Amazon
ARe
Excerpt:
I laughed at the memory as I locked
up the newsroom and rushed to my next class. I still had a smile on my face as
I plopped down on my seat in the back row of calculus. Victor Cruz, my secret
crush, entered the room. My pulse reacted to his presence, but, thank God, no
other part of me did that he could see. I didn’t want to be lusting after
anyone this year because I was planning on working hard toward my college goals
and didn’t need the distraction.
The worst thing was, Charli told me
he gave his ex-girlfriend some rash because he cheated on her. I so did
not do the sexually transmitted diseases thing, and I definitely had zerorespect
for cheaters. Not even for a hunk like him, who obviously screwed around and
didn’t care if he got girls sick.
But damn, did this guy make my
insides quiver. He was totally hot. His parents moved to New Jersey
from Spain during middle school when Vic was scrawny and didn’t speak much
English. When senior year started a month ago, no one recognized him because
he’d grown ten inches, gained fifty pounds—of muscle—and must have taken some
classes in style because, damn, the boy knew how to dress to show off his
build.
Loose jeans with a belt, black boots,
and a black, long-sleeved tee only made him sexier. And the way he walked? It
should’ve been a crime. He had a swagger about him that rivaled any of the good
old boys of Hollywood. Watching it made me quiver in places I didn’t know could
quiver.
But it wasn’t just his looks that
held me captive. He had the values of an old-fashioned guy—holding the door
open for girls, helping them with heavy stuff, defending them when guys were
too rough or mean.
If it wasn’t for that wild partying
side of him … sigh.
As he approached his seat, I couldn’t
help but stare at his thighs, mesmerized by the fluid sway they made with each
step.
He caught me staring and raised a
thick black brow. I diverted my eyes and pretended to be very interested in the
junior’s notebook next to me. But I didn’t even know his name. Ugh.
Vic slid into his seat next to me and
winked at the girls that were staring at him.
They always stared at him.
I rolled my eyes. But when I felt his
eyes on me, I shifted in my seat, fighting the funny tingle in my stomach that
came from looking at him.
The other problem was, besides being
a distraction, Vic knew how sexy he’d become. He acted so cocky and confident,
I wanted to smack the grin off his face and remind him that not long ago, he
could have passed for a ten-year-old boy who couldn’t speak English or speak to
girls.
But, whatever. He had a harem now, so
good for him. And shiny black hair, smooth, bronze skin, and deep brown eyes
that … never mind. Didn’t matter anyway.
Kylie sauntered over to him, swaying
her hips so hard, I wondered how they didn’t dislocate. She leaned over his
back and wrapped her arms around his ample shoulders, pressing her boobs into
his back. I’m sure he loved that. “Hey, Vic. Busy this weekend? My parents are
out of town, and we can go riding if you want. I’ll pack us a lunch.” She ran
her fingernails over his chest as she spoke, clearly enjoying the feel of him.
He pulled her fingers off him and
slipped out of her grasp. “Sorry, I’m busy, but thanks for asking.”
She leaned into him again, making
sure to press her boobs into his neck. I rolled my eyes so hard, they almost
didn’t return to face front. That would suck. What would I tell the nurse? I
was looking at my brain instead of in front of me and I needed an eye
adjustment?
“Maybe another time, okay?”
Vic nodded once. “Si.”
I pulled out my phone to check
messages, done with listening to the vixen and her attempts at charming the
hottest guy in school.
“Hey, Casey,” he said in his sexy
Spanish accent. He had this way of dragging out the end of my name, making it
sound like Kay Seee.
It was both unsettling and adorable,
so I just grunted at him. How else could I get anything done with him around?
About the Author: 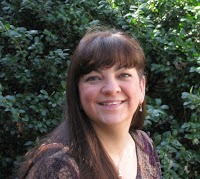 Kimberly Ann Miller received
Bachelor’s degrees from Georgian Court University and Rutgers University and a
Master’s degree from The University of Medicine and Dentistry of New
Jersey.  She is an avid reader and particularly enjoys true crime and
young adult novels.  She grew up in New Jersey and currently resides
in Monmouth County with her husband and cats. When she’s not writing, she loves
to travel to sunny islands where she snorkels by day and stargazes by
night. She always takes her Nook with her.
Website Link: http://kimberlyannmiller.com/
authorkimberlyannmiller@gmail.com
* * * * *
a Rafflecopter giveaway