I love joining in the WEP. It’s a fun and creative hop. I couldn’t do it last month, so I was delighted when I could spin a short yarn this month. The theme is Reunions. I hope you enjoy my contribution, and I hope you’ll visit the others who have shared their stories today. The link to find others is at the bottom. 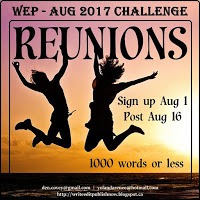 Liza’s Quilt
The walls of our cabin danced with shadows from the wood fire, but no matter how much I stoked and encouraged the flames to warm the room, the air remained chilled. When I touched Gran’s gnarled hand, the iciness of it made me weep. She emitted a cold that no fire would warm again, so I lay with her, wrapped in Liza’s quilt and listened to the fading sounds of her words.
“Sweet Mara, you are. . .” Even close to my ear, her raspy voice was barely audible. She took short, shallow sips of air, and for a moment I thought she wouldn’t say more, but then she did. “You are the only one now who will hear the Voices. Listen to them. I followed their instructions and pieced the quilt as they wanted it done.” She paused again, and I stilled my breath, listening for hers. Her hand grasped mine. Tightly. “But I have no time left to understand the mystery of this quilt, or how they intended it would help us find your sister.”
“I’ll do what you ask, Gran,” I whispered, and I burrowed closer to her as I had since childhood. The autumn leaves of her heartbeat fluttered against my chest. I willed my heart to beat stronger for the both of us, but my will was not enough to return her strength. My magick rose up in me the way I commanded it to, but it wasn’t enough either. During the night, the Voices dropped to murmurs in the darkness. By first light, Gran had been called from our world, and the Voices had fallen silent. I lay there feeling the weight of being the last of our family in the meadow, wondering how I could live without Gran and if I could learn the mystery of Liza’s quilt.
In the days that followed, the emptiness of what was once home to five, gnawed at me, and the yearning to find Liza and bring her back increased with each sunset. She was taken from the meadow when she was ten and I only eleven, five years ago. Astride their horned beasts, the Shriekers had pounded down the warren of twisted mountain trails, their dark hair whipping in the wind. In a thunder of hooves, they trampled our gardens and their piercing cries shattered our world. We’d hidden, but one rider found Liza. He scooped her up and rode off. Once again they’d taken their spoils. Two years before, they’d mortally wounded my mother. My father gave them chase, but never returned. Killed or perhaps lost in the maze leading to their lair.
The Shriekers always descended on the first full moon at the cold season’s end. Every year we hid. Every year we ached for our losses. Now the cold season was at an end again, and that night the moon would rise full-faced. At dawn the Shriekers would come. This time I was alone.
After the sun settled behind the mountain, I opened the quilt and smoothed it across the bed. Gran called her stitchery a crazy quilt. Her embroidery meandered throughout the pieced fabrics and along the edges like a meadow path, looping and inviting my fingers to follow her fine hand work. Liza loved sunflower yellow, and Gran’s nimble figures used to sew garments in those golden hues for my sister. Many of the patch-worked pieces were those remnants of Liza’s childhood dresses long ago washed into threads. These bits trailed throughout the quilt, a bright reminder of her laughter and sweet nature. Liza was born fair and full of joy. I’d come to the world with raven hair and heavy with our family legacy, magick. My magick had saved me that day from the Shriekers, but it hadn’t been enough to save Liza. I so missed my sister, and I needed her. I needed the Voices to return, but I was beginning to think they were Gran’s magick, and not mine. They might never return.
“Speak to me,” I commanded. But the cabin remained silent. With the quilt covering my shoulders, I walked outside to watch the moon glow spread over the meadow.
As I stood looking up, a tingling like butterfly wings started across my back. I ignored it at first, but it was insistent, so I pulled off the quilt and held it before me to find what the cause of that sensation could be. There was nothing, and yet, the palms of my hands now felt that same tingling. I spread the quilt gently on the earth, and I’d no sooner released it from my grasp than the yellow remnants from Liza’s childhood clothing grew bright. When I looked into the distance, a trail of sunflower gold spread from the quilt, away from the cabin and toward the mountain pass. It continued as far as I could see.
I gazed into the distance, the Voices singing inside my heart. “Follow the golden way.”
They’d guided Gran’s nimble fingers to create the way to my sister, and now that I had that path to follow I didn’t hesitate. Even with the full moon, the night held danger, but I felt my magick grow steadily stronger with each step I took, and my fear fell behind, a detached shadow.
At the most tangled crossroads, the first sun rays spiked into the sky. Sensing movement ahead, I stopped, straining to hear. My breath stilled. From beyond the curve I heard the sound of hurried footfalls, and before I crested the rise, Liza came running toward me, her smile more glorious than when she was a child, her arms open and quick to embrace me.
“How––” I gasped.
She didn’t let me finish. “I felt your magick, and the golden light guided me through the Shriekers’ labyrinth. At last I could escape and find you. We clung to each other, my sister and I together again.
And then a thunder of hooves shook the earth.