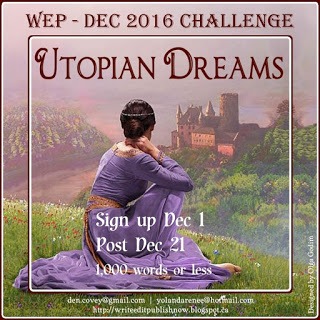 Our lovely hostesses are Denise Covey and Yolanda Yenee
What to play? Click HERE and find the Linky to other posts.
Utopian Dreams come in all shapes and sizes, but what better one to share with someone than perfect love. If only you’ll love me, life will be a dream.
Shaboom!
Magic!

Brandon didn’t hear the faint knock on the door, but Lilly did, and her sharp bark alerted him to the visitor. She waddled to the entry and waited expectantly, dragging her tail across the floor. Brandon opened the door and faced the mirror image of himself.

The slump-shouldered, wispy- haired man, clutched a hat to his chest. He smoothed a few strands of white hair into place and waited until Brandon spoke.

“Bailey?” he had to search for his brother’s name, but found it lodged behind some fifty years of trivia and television re-runs.

“It’s me, all right.” Bailey wiped his feet on the welcome mat and waited, but Brandon didn’t invite him in.  Bailey looked away, rolling the brim of his hat then smoothing it again. “I came to tell you Lilly’s dead.”

Lilly cocked her head at the familiar syllables, and Brandon did a quick glance at her. Dead? And then it came to him. “Oh, yes. Lilly.” He’d forgotten Bailey’s wife’s name was the same as his Spaniel and, for a moment, the reason he’d named all his dogs Lilly. “How’d that happen?”

“Heart. The doc said it sort of shriveled up.”

Brandon dredged up the memory of the dark-eyed girl with the swishy pony tail and dove gray eyes. She’d captured the hearts of all the senior boys in the class of ’56, but she only had those eyes on him, Brandon DeForest. Now he tried to imagine that young girl’s heart wrinkled and contracted. Still.

“Condolences,” Brandon said, wanting to be done with this conversation, but not knowing how to end it.

“She said she was sorry. I came to tell you that. She asked me to.” When Brandon only nodded in silence, Bailey put his hat on and stepped away from the porch. “I’m sorry, too, if that matters anymore.” At the sidewalk,  he turned and waved.

He opened the music cabinet and took out a well-worn record, blew across the black disc, then set it on the turntable. Lilly whined to be held, so he gathered her onto his lap and drummed his fingers in time to the song, his and Lily’s song. Then, with his eyes closed, he dreamed again until the music stopped.