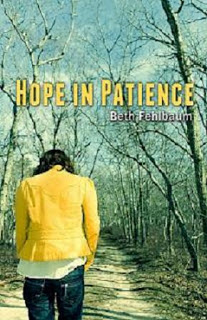 I’m so excited to have a fellow WestSide author, BETH FEHLBAUM visit me this week. Here are some of the things Beth has to say about her books, HOPE IN PATIENCE and COURAGE IN PATIENCE. She tells us a bit about herself and shares some advice for writers. Welcome, Beth.
What triggered the idea for your books, Hope in Patience and Courage in Patience?
I had been in therapy for a little over a year. I was sexually abused from the age of 8 to 15 and emotionally abused much longer than that. I was writing stories and poems as a way of processing my grief, disbelief, and rage, and sharing them with my therapist.  One day, he suggested that I try writing a novel.  I tried for about four months but I kept ending up in the same place of trying to figure out why I had been abused and why my mom turned her back on me when I asked for help as a teen, and again when I told her I was struggling with what happened in my childhood.
One day I realized that I was getting nowhere and decided to try telling a story of recovery from the point of view of a 15 year old girl who was a recent transplant to the Piney Woods of East Texas.  That’s how Ashley Nicole Asher, age 15, and the tiny East Texas town of Patience came to be.
In my own life, I longed for a father since I had never really known my biological father, and my stepfather was my perpetrator, so I gave Ashley a very strong father figure in David.
I guess you could say that what triggered the Patience series was my own longing to understand and move past my own pain.
Is there a favorite line or two from either of your books that you’d like to share with us? 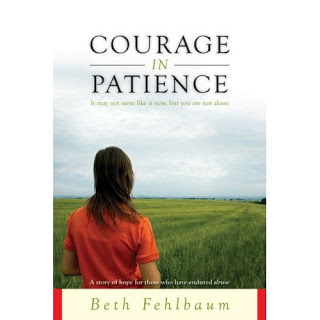 The sentence that serves as the preface for Courage in Patience is, “Courage is not so much avoiding danger but is conquering it.” And the sentence that prefaces Hope in Patience is, “Hope is the opposite of fear.”  Both of those are credited to “A wise person”—and that wise person is my (now-former) therapist.
Are you working on another book? Can you give us a sneak preview?
I am working on Truth in Patience, the third and probably last book in the Patience series. It opens with Ashley making out with her boyfriend, Joshua, who we meet in Hope in Patience—and she’s struggling with something that’s very common to survivors of sexual abuse—the desire to be close to someone she loves, conflicting with this screaming, freaking out inner voice that is basically setting off sirens in her head because it’s so, so difficult to be physically close with someone when the only “version” of that the victim has previously had was in the context of molestation or rape.  I’m about four chapters in so far, and I plan on finishing the first draft the summer of 2011.
What’s been the most exciting/daunting part of becoming a published author?
It’s very exciting to be nominated for an award: Hope in Patience was nominated for a 2011 YALSA Quick Pick for Reluctant Readers.  It’s exciting to be a more public person, and also somewhat daunting.  I’m starting to be asked to speak at things like luncheons and crime victim support group meetings, and that’s both exciting and a little nerve-wracking.  One thing I’ve learned from my life experiences is to compare things that make me nervous to the worst things that I’ve ever been through.  It really helps put it in perspective!  Even though it’s not always easy for me to “come out” as a survivor of childhood sexual abuse, I really want people to know that there is hope for recovery.  It’s a very hard road to travel, but it can be done.
Is there anything you can share with hopeful writers that might help them– something about writing or seeking representation or preparing for publication.
I would encourage them to “just write.”  Write for the joy that it brings you or the feeling it gives you inside, and write the very best manuscript you can for yourself…THEN worry about finding an agent and selling your work.  Believe in yourself and never give up.
As far as preparing for publication, it’s a lot of hard work.  Publicists are great, and I do have one for the launch of Hope in Patience, but writers need to be aware that to get your book “out there”, it takes an enormous amount of self-promotion.  If you just sit back and wait for your books to become known, it probably won’t happen.
I invite readers to stop by my WEBSITE, and check out Chapter previews for both Hope in Patience and Courage in Patience!