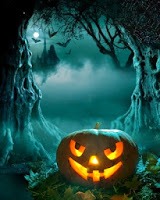 What better story to tell this Halloween than one about a grave that moves! Don’t miss out on the Rafflecopter entry. Take it away, Bish

Thanks for letting me haunt your blog, Lee! Today I’m going to share a scene that was removed from my book The Bowl and the Stone: A Haunting Tale from the Virgin Islands. At then end, I’ll tell the “real” story.

Like any writer, I had to revise and edit The Bowl and Stone… a lot. I changed POV and tense more times than I care to admit. Whole chapters and scenes were ripped from the pages, each one tearing at my heart. But when three beta readers say the same thing, one has to take a serious look. This scene, along with others related to it, was removed because ultimately they made Sam and her best friend, Nick, look rather mean and petty, which is not what I intended. Here the friends are explaining about a grave they believe moves from place to place, to two tourist kids.
***
The Mysterious Moving Grave 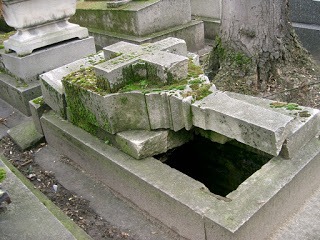 Source
The two tourist kids were so annoying we had to tell them the story of the Mysterious Moving Grave.
“Once there was this really mean man,” said Nick. “He was so mean nothing grew on his farm.”
“He was married,” I continued, “and had three kids. He drank a lot and blamed them for his not being able to grow anything.”
“One night he got really drunk and went into a terrible rage. That’s when he did it.” Nick paused for effect.
“Did what?” asked the thin, pale boy who looked like an albino salamander.
“That’s when he killed his wife and kids,” he answered.
“With a machete,” I said.
“Hacked all four of ’em to bits.” Nick waved his arm like he was slicing something up. “Scattered their body parts all over his land. He thought it would make things grow.”
“Gross!” The girl covered her mouth with a hand and turned green as genip.
“It gets better,” I said. “He was caught and tried and they hung him right here at Gallows Point, which is where they hung all the criminals and pirates back then. Even though he was a bad man his brother wanted to bury him all proper, so he built him a small concrete tomb.”
Nick continued. “The problem is he’s restless. He keeps getting out of his grave and wandering around Gallows Point with that machete, looking for the people who hanged him. People have heard him scraping his machete along the walls of the cottages, particularly the one you’re staying in. And because he keeps climbing in and out of his grave, it keeps moving. Sometimes it’s up near the road, sometimes closer to the genip tree.”
The Real Story
Since we had to walk by the graveyard on an almost daily basis my best friend Jay and I kept tabs on a grave that appeared to move from the genip tree, up to the road, and back down to the tree. As children with prodigious imaginations, we made up all sorts of stories about it.
The truth is rather mundane. The grave did indeed appear to move, but not because a ghost was climbing in and out of the small concrete tomb. Back in the day the road past the graveyard was dirt and just wide enough for two Jeeps to pass. During the rainy season, usually the summer, the tall Guinea grass grew thickly along the side of the road, making the road appear narrower, making the grave look farther from the road. During the dry season, usually the winter, the grass died back, making the road appear wider, thus making the grave look closer to the road.
I don’t have any pictures of Jay and me as children. But here we are in our 20s in the windmill at Annaberg, a sugar plantation that has small but important role in The Bowl and the Stone.
OOOOooooooOOOOOOoooooo. Happy Halloween, everyone! 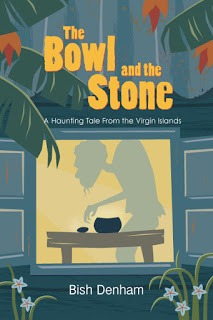 Amazon  Smashwords
About the Book:
Pirates. Explorers. And spooky ghost hunters.
It’s 1962. Sam and her best friend, Nick, have the whole island of St. John, in the U. S. Virgin Islands, as their playground. They’ve got 240 year-old sugar plantation ruins to explore, beaches to swim, and trails to hike.
But when a man disappears like a vapor right in front of them, they must confront a scary new reality. They’re being haunted. By whom? And why? He’s even creeping into Nick’s dreams.
They need help, but the one who might be able to give it is Trumps, a reclusive hunchback who doesn’t like people, especially kids. Are Sam and Nick brave enough to face him? And if they do, will he listen to them?
As carefree summer games turn into eerie hauntings, Sam and Nick learn more about themselves and life than they could ever have imagined. 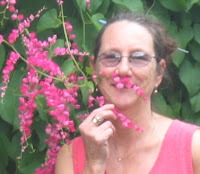 About the Author
Bish Denham, whose mother’s side of the family has been in the Caribbean for over one hundred years, was raised in the U. S. Virgin Islands. She still has lots of family living there whom she visits regularly.
She says, “Growing up in the islands was like living inside a history book. Columbus named the islands, Sir Francis Drake sailed through the area, and Alexander Hamilton was raised on St. Croix. The ruins of hundreds of sugar plantations, built with the sweat and blood of slave labor, litter the islands. Then there were the pirates who plied the waters. It is within this atmosphere of wonder and mystery, that I grew up. Life for me was magical, and through my writing I hope to pass on some of that magic.”
The Bowl and the Stone: A Haunting Tale from the Virgin Islands, is her third book and second novel. You can find Anansi and Company: Retold Jamaican Tales and A Lizard’s Tail, at Amazon.com.
Learn more about Bish:  Random Thoughts. Facebook. Twitter. Goodreads
ENTER THE RAFFLECOPTER DRAWING FOR THE BOWL AND THE STONE.
Tomorrow is November 1 and that means my Email Connect Message will be going out. I have a new Featured Follower for the month, and some interesting stuff about Amazon algorithms and titles. Don’t miss this one.

Quote of the Week: (In honor of election week!)  “There is nothing further away from Washington than the entire world.” Arthur Miller.