Since the death of her parents, Callan Blair has been shunted from one foster family to another, her dangerous secret forcing the move each time. Her latest foster family quickly ships her off to an exclusive boarding school in the Cumbrian countryside. While her foster-brother James makes it his mission to get Callan expelled, a nearby ancient castle holds the secret doorway to another land…

When Callan is forced through the doorway, she finds herself in the magical continent of Tardith, where she’s shocked to learn her schoolmates Gawain and Darrion are respected soldiers in service to the king of Nordaine, one of Tardith’s realms. More than that, the two are potential heirs to the Black Knight—Nordaine’s crown prince.

But when the Black Knight fails to return from a mysterious trip, the realm teeters on the brink of war. Darrion and Gawain set out to find him, while Callan discovers there is more to her family history than she thought. The elves are claiming she is their princess.
Now with Darrion growing ever more antagonistic and her friendship with Gawain blossoming, Callan must decide whether to stay in Nordaine—where her secret grows ever more threatening—or go to the elves and uncover the truth about her family before war sets the realms afire.
******
I knew from the beginning that I’d follow a more traditional publishing route with The Vanished Knight.
While I see self-publishing as a viable option these days, I knew it wouldn’t suit me for various reasons. For one thing, I’m too perfectionistic to release something of a standard lower than traditionally published books. Besides that, my business training told me that moving into a market with so much competition, with a lower quality product, was stupidity. I also knew I had zero experience with pro editing, formatting, graphic design etc.
Which meant that if I wanted to produce something of a standard acceptable for me, I’d have to pay for everything. Up front. In dollars. Which is ten times my home currency. Yeah… not a pretty calculation to make.
So agents and editor contracts it would be, then. When I finished my novel, and did the edits as far as I could possibly take them alone, I started querying.
And querying.
And querying.
See, writing is in a highly subjective market. I tried to figure out if something was off with my novel and edited it two more times. Still nothing. Agents just weren’t interested in my huge-ass manuscript. In fact, I think there are exactly two out of almost 160 agents who read what I’d sent in.
It really made me jaded with the whole process. But that’s not what I want to go into today. I just want to say that I was almost done with querying. As in, I’d made it official on my blog that if I didn’t get joy within two months for that date, I’d find a way to self-publish after all.

That day, I impulsively sent a mmm… What shall I call it? I sent an inquiry to a new editor at Etopia Press. Assuming that it’d be another no, I started writing the sequel so that I’d have it ready for self-publishing. Within a few days, the editor came back and asked for my full manuscript. A few weeks after that, I got a yes and a publishing contract.
Sure, it came with a few hoops for me to jump through (I had to split my manuscript into two), but my editor saw what I was heading for with the story and loved all of it. So I signed. And the book came out within a few days of the anniversary of me starting to query. There’s just something so poetic about that, isn’t there?
But yeah, if you know that you’ve got something good, don’t give up on it. You only need one person to get you before you get your lucky break. Keep going!
About the author
M. Gerrick (AKA Misha Gericke) has basically created stories since before she could write. Many of those stories grew up with her and can be seen in her current projects.
She lives close to Cape Town, with a view over False Bay and Table Mountain.
If you’d like to contact her, feel free to mail her at warofsixcrowns(AT)gmail(DOT)com

Another first Wednesday is here (thanks to ALEX CAVANAUGH for the idea) and another opportunity to explore what it means to be a writer with insecurities and literary warts and many times a sore bum.

I guess I do it because I love words and the challenge of working them into a pattern to express my ideas. Then there’s the pleasure of seeing my thoughts down in a form that is less ephemeral than my conversations. I guess those are two of the reasons. And sometimes it’s just exciting to read something I’ve written and think it’s worthy of the time, the paper and the ink.

What keeps you going, insecurities and all? Or maybe you don’t have insecurities. How do you manage to keep from that? 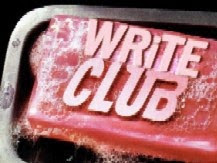 Put JULY 8 on your calendars because the first round of this year’s WRITE CLUB starts. What a great way to get feedback from your fellow writers. We have DL HAMMONS to thank for this super idea. Has anyone entered? Will you go to the submissions and vote this year?

Oh, and do you have any nominations for MISHA GERICKE’S Paying It Forward? Check out her BLOG for the details. I’ve nominated two of my favorite bloggers.