Since I’ve made every mistake a writer can, I thought I could speak to this issue with some authority.

I waited way too long to start thinking about publicity.

I thought my publisher would do it all. Please don’t laugh. I was a mere child when I began.

I said, “If I can write a book, surely I can promote all by myself.”

I thought my book was good enough I didn’t need to worry about promoting it. (This isn’t exactly what I thought, but close.)

I thought that the media would pick up my Tweets and my Blog Posts and my FB Post in no time flat.

I thought that if I did a few Tweets, a few Blog Posts, a few FB Posts, I could kick back and have a nap.

I thought once I had a publisher, I didn’t have to think about finding another one.

Now that I’m a seasoned soldier in the book publishing business I can admit to all these mistakes and more. So what to do to avoid these?

7 to 12 months before launch

Just before the big DAY

After the big DAY: do not stop promoting.

This isn’t a complete list of things to do, so I hope you’ll add to it. I’ve gleaned these steps from other bloggers, my experience and reading what publicists have to say.

Here’s a writer who know all of this stuff. Be sure to take advantage of this last day of his offer.  CassaFire is 99 cents at AMAZON and his publisher’s site. 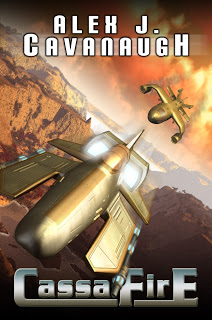 Woot and Double Woot!
Here comes a super book and a super give away. You can’t miss this one. From February 27 through March 9 anyone who comments on ALEX J. CAVANAUGH’S posts during that time can win a special package from his publisher: a copy of CassaFire and of CassaStar, a large tote bag, and a mug.

The Catch Fire! sign up form will close 9 pm EST Monday night, February 27, and the five winners will be listed on Alex’s blog post the following morning.

Be sure to join the Twitter Party, too. The Twitter hashtag for the party is #CatchFire . . . Make CassaFire Catch Fire!

CassaStar was just the beginning…

The Vindicarn War is a distant memory and Byron’s days of piloting Cosbolt fighters are over. He has kept the promise he made to his fallen mentor and friend – to probe space on an exploration vessel. Shuttle work is dull, but it’s a free and solitary existence. The senior officer is content with his life aboard the Rennather.

The detection of alien ruins sends the exploration ship to the distant planet of Tgren. If their scientists can decipher the language, they can unlock the secrets of this device. Is it a key to the Tgren’s civilization or a weapon of unimaginable power? Tensions mount as their new allies are suspicious of the Cassan’s technology and strange mental abilities.

To complicate matters, the Tgrens are showing signs of mental powers themselves; the strongest of which belongs to a pilot named Athee, a woman whose skills rival Byron’s unique abilities. Forced to train her mind and further develop her flying aptitude, he finds his patience strained. Add a reluctant friendship with a young scientist, and he feels invaded on every level. All Byron wanted was his privacy…

CassaFire is the sequel to Cavanaugh’s first book, CassaStar, an Amazon Top Ten Best Seller:
“…calls to mind the youthful focus of Robert Heinlein’s early military sf, as well as the excitement of space opera epitomized by the many Star Wars novels. Fast-paced military action and a youthful protagonist make this a good choice for both young adult and adult fans of space wars.” – Library Journal

You can visit Alex J. Cavanaugh’s blog.
Get his Book Trailer.

Cassa Fire at Barnes and Noble, Amazon and Amazon Kindle