Over the years I’ve heard or read stories about other people’s lives. I’ve also had a few experiences that have entered into my “Let me tell you about the time” category. Some of these stories have crept into my books. Others are waiting in the wings.

Last week I told you a bit about the island of Halki/Chalki, and I promised to tell you about the war hero who’s commemorated there. His statue is famous, but when I tried to find more specific history I couldn’t. Fortunately, while I was on the island, I met his sister. She was visiting her home that week, so it was only by chance that we connected and that she told our women’s group the story.

It was 1944 and her brother was a member of the resistance. When the Italians came hunting for him, he hid–with the help of the locals–in one of the village cisterns. When the searchers failed to locate him, they gathered all of the men, women and children into the place where we sat that night. The sister pointed at the beautiful beach in front of us, and in spite of the many years between her loss and that night, her eyes glistened with tears when she said, “Just there they stood with guns aimed at them.”

The Italians sent the fugitive a message which was simple. Either he surrender before nightfall or the villagers would be shot.

Her brother saved his village that day and the woman expressed her pride as well as her sorrow with such dignity that I envied her her noble brother and her tragedy.

I keep mentioning the women’s group, and there are so many stories about the seminars we participated in, the trips we took together, the women themselves. Many of them had written and presented papers on women’s issues in the post USSR Russia, so our seminars focused on topics like: Feminism East and West, Can Russian Women Create Themselves as Citizens of a Democratic,Capitalist State?, Soviet Women at the Crossroads of Perestoika, The Role of Women in Rebuilding the Russian Economy.

These women were from Russia, UK, Greece, US and Italy. I could spend a year telling those stories. I have notes from our conversations that reveal the humanity of each person on this adventure. However, I think, instead, I’ll just show you a few of the women with a quick blurb about each.

Here we are together by the harbor. We have seminars all morning, take a break for lunch and some fun, then back to our seminar. At four we were done and it was party time.

Their fields or occupations: Farmer, Biologist, International Education, Health Care Provider (she’d worked with Mother Teresa in India with lepers) University Professors (there were 5) , Inter-Cultural Communication, Political Activist. You can see how different we all were. 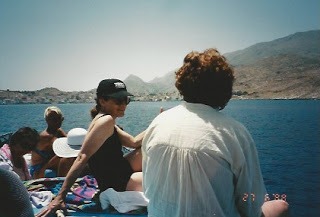 On our way across to another small island for a picnic. 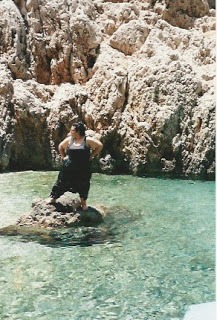 Soula was a feminine activist in the Communist party in Greece. The word was you didn’t mess with Soula.

Did you know that the Greek army beat back the Italian invasion in 1940 and that Germany had to step in. The occupation of Greece destroyed 80% of its industry and 90% of it’s bridges, railways and ports.

Quote of the Week: “All war is a symptom of man’s failure as a thinking animal.” John Steinbeck
This is it for the month of January, and I’m taking a break during February. See everyone again in March with some more stories.