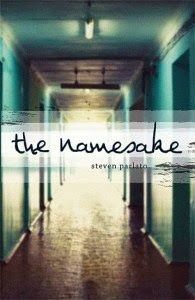 Barnes and Noble. Amazon. Indiebound
. . . Steve Parlato, author of The Namesake. I first met Steve in the UncommonYa group and came to appreciate his hard work and generous nature. He always chimed in during discussions, tweeted and re-tweeted author news, and posted regularly on the blog. Then I read his book and was drawn into his story by some seriously good writing and a story that touched my heart. I reviewed it just recently. This an example of a young adult story that can be devoured by a more mature reader and truly appreciated by them. My Review.
BLURB: The Namesake ~ (Adapted from Merit’s dustjacket copy)
For his teenage son, Evan Sr.’s decision to end his life is a deep betrayal. Evan was named for his father, and looks eerily like him, but the suicide proves the father he thought he knew was just a myth. A locked trunk may hold answers, and, thanks to his grandmother, the key is literally in Evan’s hand. Will his quest for answers help Evan find peace, or will he merely follow his father’s path to despair?
In a voice that resonates with the authenticity of grief, Steven Parlato tells a different coming-of-age story, about a boy thrust into adulthood too soon, through the corridor of shame, disbelief, and finally…compassion.

Kirkus Reviews:
Evan Galloway, in his third year at Saint Sebastian’s Catholic High School, is told to “write what you know” for his college-application essays. But it’s what he doesn’t know that is haunting him.
“It’s funny how perfectly life splits into before and after,” Evan says. Before his father killed himself, home life was pretty normal—Now there’s a hole in that life that can’t be filled or explained. Evan takes on a quest…and the story becomes compelling, as answers to questions slowly surface…His digging… “let[s] the dragon out of the cave,” though, as troubling information unfolds about his father… Parlato’s debut novel, many years in the making, is a painstaking dissection of a father’s past and its reverberations in his son’s life.
A memorable, disturbing story, carefully wrought. (Fiction. 14 & up) 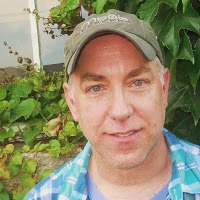 Lee, I’m so honored to be September’s Featured Follower. It’s been a summer of deep personal loss—my dad passed in July after a long cancer battle—and I’ve been in a bit of a creative slump. But the chance to share with your readers is inspiring. And it couldn’t come at a better time: I’m excited to share the news that Brilliance Audio’s new CD version of The Namesake audiobook releases September 6. It’s available for pre-order now on Amazon and Barnes and Noble

And stay tuned because Steve has more news about his next book. I’ll be posting all about it next week! The Precious Dreadful! is the title. Can’t wait to find out more.

#InkRipples is a monthly meme created by Kai Strand, Mary Waibel, and Katie L. Carroll. They post on the first Monday of every month with a new topic. They’re all authors, but you don’t have to be to participate.
The idea of #InkRipples is to toss a word, idea, image, whatever into the inkwell and see what kind of ripples it makes. They provide the topics and will be blogging about them on the first Monday of the month. You can spread your own ripples by blogging about the topic any day of the month that fits your schedule, just be sure to include links back to Katie, Kai, and Mary.

My favorite banned book is Catch 22. I still have a torn and marked up paperback of my first copy, and I wouldn’t part with it. Every time I run into situations that seem to have no solutions or are totally insane, I hear Heller’s words in my head.

So here are 3 Quotes for the Week from Joseph Heller’s Catch-22:

“Insanity is contagious.”
“[They] agreed that it was neither possible nor necessary to educate people who never questioned anything.”
“Why are they going to ‘disappear him?'”
“I don’t know.”
“It doesn’t make sense. It isn’t even good grammar.”