I had this short piece on my computer, and decided to publish it. The weather (hot), the wine (chilled). the day (long) all contributed to my decision.

Also I was just edged out of first place in the August WEP by this cat person named Hatt (rhymes with cat), so I thought I’d better ramp up my cat game a bit. Congrats to him and to Hilary as well. Applause to you both.

Thanks to Denise and Yolanda for the fun and the great themes.

Some of you know that I once lived in Vientiane, Laos. The stories I have tucked away from that experience fill a file drawer, and I don’t expect to ever be able to set all of them down. But here’s one that I thought might be fun.

Our kitchen and wash room were separate from the main house. Very sensible because of the heat. Alongside these rooms was an extra sleeping room, and I had a girl who lived there with her family. She worked for me, and over time, we became good friends. She taught me some Lao and I taught her some English. With only a few words, we created some interesting pidgin sentences, so we understood each other. I have lots of stories about when we didn’t!

Late one night–her husband gone, my husband gone–a terrible sound came from the washroom. I grabbed the kitchen broom and was outside in a shot. I was sure we were in grave danger. Nong met me, carrying a garden rake. You can see why we got along. We both liked to be armed and ready.

Holding our weapons out, we advanced on the wash room, but it was empty, except for the washing machine and some boxes. We waited, listening, but there was only silence. We no sooner backed out than that same sound froze us to the spot. Imagine a dinosaur trapped inside an 8 by 8 cement room and you’ve imagined what we heard coming from those dark recesses. Once we’d girded our loins, we advance shoulder to shoulder and banged on the side of the washing machine. 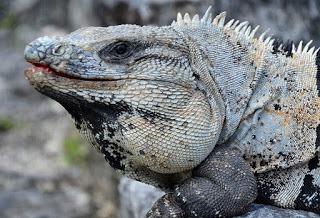 That’s when the dinosaur sprang. Two feet long. Very prehistoric. Quite cranky because of all of our whacking. The iguana came at us. Drop weapons. Run for life. Wedge selves in doorway. Scream. Un-wedge and head for the house.

I think the iguana decided he didn’t care much for the chase and took off into the jungle where he could get a good night’s sleep. It took a week before Nong or I had the courage to go into the washroom, and that happened only after one of our husbands checked behind the washing machine.

Quote of the Week: “Traveling – it leaves you speechless, then turns you into a storyteller.” – Ibn Battuta, World Traveler