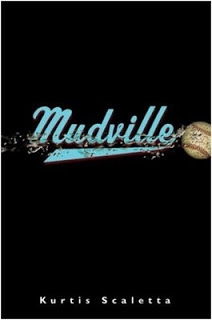 And the winner is . . .  Daisy Hickman. Contact Kurtis and collect your prize. Congratulations.

I fell in love with MUDVILLE. It was quirky, warmhearted, and filled with brilliant moments between a father and his son. I was really pleased when KURTIS SCALETTA said he’d visit my blog and tell us more about himself and his next book. Welcome Kurtis and be sure to check out his contest below.

Mudville is about a small town where it’s been raining for 22 years, suspending a game between two rival towns indefinitely. The hero is Roy, a good kid who loves baseball but hasn’t been able to play at home his whole life. One day he comes home from camp and there’s a new kid there — a foster kid named Sturgis. It stops raining a few days later and they decide to get a team together and stage a rematch. Sturgis is an amazing pitcher but not much of a team player. Roy is a catcher and the team’s captain; he has to work with Sturgis as well as a bunch of other kids who’ve never played the game. Did I mention that the rival town isn’t even there any more? So you might say he has his work cut out for him. 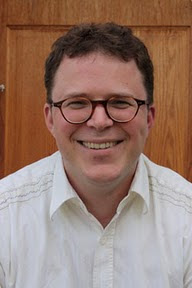 ABOUT THE AUTHOR:
Kurtis Scaletta is the author of two middle grade novels. One is about baseball, the other is about snakes. He has also written stories about bad poetry, onion soup, overdue library books, and Steve Miller cover bands: all the issues that young people grapple with.

Kurtis grew up in several states and a few foreign countries, including Liberia, the setting of his second novel. He now makes his home in Minneapolis with his wife and several cats. In addition to writing, he is an instructional technology consultant in higher education.

IF YOU HAD ADVICE FOR WRITERS WHAT WOULD IT BE?

My advice to writers is the same stuff they’ve seen everywhere else — join a critique group, work your way through a few drafts before you query, know the market well enough to place yourself in it, don’t take rejection personally, find a happy balance between prevailing against adversity and not taking a hint, don’t spam agents or editors with poorly written or poorly targeted queries, and don’t take publishing as the be-all end-all of writing. Write every day if you can, but don’t be afraid to take a few days off if you’ve been writing a lot and need a break. Spend some time at the library, just to remember the childlike joy of knowing that there are so many different kinds of books and any one of them might open a new world to you.

WHO WERE YOUR FAVORITE WRITERS WHEN YOU WERE GROWING UP?

My favorite writers as a kid were Daniel Pinkwater and Betsy Byars. The representative books by each other for me are Alan Mendelsohn, the Boy from Mars by Pinkwater and The Midnight Fox by Byars. I was an avid reader before I discovered them, but those were the kinds of books that convinced me I wanted to do this myself, that it was my calling. Maybe that’s surprising because neither ever wrote a baseball book, I don’t think — and I never read Matt Christopher or John Tunis. I write for middle-grade aged readers because that was my favorite time as a reader.

TELL US ABOUT YOUR SECOND BOOK THAT’S ALREADY OUT!

My second book is Mamba Point.  It’s about a kid who moves to Monrovia, Liberia from the Midwest– just like I did — and from the moment he gets there he keeps coming across black mambas. They’re very deadly snakes, and he can’t seem to avoid them. He’s an anxious kid anyway so this sets him back a bit. He realizes he might have a connection to the snake and kind of befriends one, even keeping it in his room. He starts to feel bolder, which he needs, but the boldness gets him into some trouble. So it’s a boy and his snake story set in Africa, and it’s also about a kid dealing with growing pains and culture shock at the same time.

My third book is currently untitled, even though it’s in the second round of edits and will be out from Knopf next fall (knock on wood). It’s about this little town in Maine that’s being taken over by a giant glowing fungus. Giant glowing fungi are real — they can live thousands of years and spread around for miles and burrow deep into the ground. They are really creepy and fascinating. Anyway, there’s a kid named Eric who finds this thing sprawling out around the woods outside his home at the same time a lot of other stuff is going haywire in his life. He meets a teen runaway named Mandy who says the fungus is even worse than he imagines, that it’s likely to destroy the town. So they set out to do something about it.

I’m reluctant to share any passages before they are finalized, but there are two in this book that I am really proud of. One is a harrowing scene involving a pig. The other is a football game on a field covered with mushrooms.

IT LOOKS LIKE WE ARE ALL IN FOR SOME GREAT ACTION SCENES.

NOW READERS HERE’S YOUR CHANCE TO WIN ANOTHER DEBUT AUTHOR CONTEST: LEAVE A COMMENT ABOUT YOUR FAVORITE THING TO DO ON A RAINY DAY. KURTIS WILL CHOOSE THE BEST COMMENT AND GIVE AWAY A FREE CRITIQUE FOR YOUR QUERY LETTER OR YOUR FIRST CHAPTER.

PLEASE CHECK OUT THIS AUTHOR ON TWITTER AND FACEBOOK. HIS BOOKS ARE AVAILABLE AT INDIEBOUND AND BETTER WORLD BOOKS AND AMAZON.