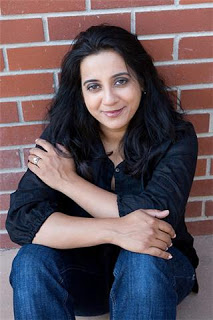 I could hardly wait for NAHEED HASNET to be here. Her book sounds fabulous and when I read her bio I knew you’d find her incredibly interesting. (Be sure to check out her advice and the contest below.)

Welcome, Naheed. It’s great to finally learn more about you and your debut novel  SHOOTING KABUL, which I can’t wait to read.

Here’s a bit about our featured debut novelist.

N.H. Senzai grew up speaking two languages, balancing a life lived on the edge of two cultures. She got on a plane for the first time at two months in Chicago, where she was born, and has been travelling ever since. She grew up in San Francisco, Jubail, Saudi Arabia, and attended boarding school in London, England where she was voted “most likely to lead a literary revolution” due to her ability to get away with reading comic books in class. She’s hiked across the Alps, road-tripped through Mexico, swum with barracudas in the Red Sea, taken a train across the Soviet Union, floated down the Nile, and sat in contemplation at the Taj Mahal. Somewhere along the way she attended UC Berkeley and Columbia University and has landed back home in San Francisco where she lives with her husband, a professor of political science, son, and a cat who owns them. During the day she can be found working for a consulting firm that helps companies with their inventions and patents.

AND HERE’S THE BOOK. Fadi never imagined he’d start middle school in Fremont, California, thousands of miles away from home in Kabul.  But, here he was, half a world apart from his missing six year old sister who’d been lost because of him, as they’d fled Afghanistan. Adjusting to life in the United States isn’t easy for Fadi’s family and as the events of September 11th unfold, the prospects of locating Mariam in a war torn Afghanistan seem slim — impossible. Desperate, Fadi tries every hare-brained scheme he can think of to find her. When a photography competition with a grand prize trip to India is announced, Fadi sees his chance to return to Afghanistan and find his sister.  But can one photo really bring Mariam home?

Based in part on Ms. Senzai’s husband’s experience fleeing Soviet controlled Afghanistan in 1979, Shooting Kabul is a powerful story of hope, love, and perseverance.

How did you come to write Shooting Kabul?

I wrote in my author’s note that I didn’t want to write SHOOTING KABUL, really, I didn’t. I resisted writing it for many years because it deals with many sensitive and personal issues—  9/11, Islam, the Taliban, Afghan culture and politics, coupled with my husband’s family history and escape from Kabul. For thousands of years, Afghanistan has been a battle­ground for outsiders. Alexander the Great and Genghis Khan came with their armies, as did the British and the Soviets. All attempted to conquer and occupy, yet failed. There are lessons to be learned as the United States currently contemplates its role in this war-torn country. It is a land still ravaged by war and ethnic tensions, but despite these facts, Afghans remain a strong and proud people.

But, at the urging of my agent, I decided to take the plunge – I felt that I had an interesting story to share, coupled with the opportunity to introduce readers to a new world. So, as I began to write, I made sure that I relayed these subjects with as much accuracy as I could since there is tremendous complexity in explaining things like terrorism, Afghan culture, Islamic practices etc. and I wanted to do it in a nuanced, truthful way that could be understood by young and old alike. It is my hope that the reader, having walked in my protagonist, Fadi’s, shoes, they learn that Fadi and his family are similar to their own; that their hopes, dreams and desires mirror theirs.

Is there anything you’ve learned in writing this story, selling it, seeing it published that you’ll share and perhaps help aspiring writers reach their goal of publication? (Some things to do or avoid or surprises, good and not so good, that you can share?)

I really feel that writers should dig within themselves and write what they know, from their unique perspective. An easy trap some writers fall into is following trends – who hasn’t seen the tremendous success of vampire books and its multiple spin offs? Instead of following, you should think outside the proverbial box and create a unique tale that only you can tell, based on your personal experiences. I was able to write SHOOTING KABUL because I have first-hand knowledge into the Afghan community and feel honored to share some of their experiences. Once I set my mind to write it, I wrote SHOOTING KABUL in short period of time – about six months. Because I feel that it relays an “authentic” voice, the book got noticed by a few different publishing houses and my agent, Michael Bourret @Dystel & Goderich sold it at auction. We decided to go with the talented Alexandra Penfold at Simon & Schuster and my editorial journey was truly collaborative. Alexandra pulled the best out of me, while allowing space to maintain my voice and keep the book’s integrity. So I would say, be true to yourself and share your unique story in a way that only you can!

There’s not much better advice than that, writers.

CONTEST:  IN YOUR COMMENT TELL US ABOUT ANYTHING YOU’VE EITHER RESISTED WRITING ABOUT OR CAN’T WAIT TO WRITE ABOUT. THE MORE EXOTIC, ROMANTIC, SCARY, FUNNY, HEARTWARMING IT IS, THE MORE LIKELY YOU ARE TO WIN A SIGNED ARC OF SHOOTING KABUL.

Now go and buy SHOOTING KABUL at your local Indie or order it from Amazon.  And be sure to visit the AUTHOR’S BLOG. It’s worth dropping in and once you do, you’ll stay.