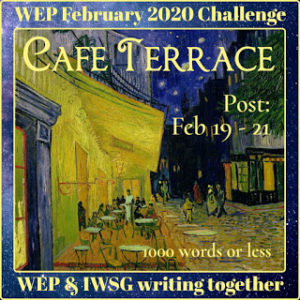 The lamplighter coaxes the gaslight to life, and its soft glow pushes back the night. I watch from a distance as waiters ready the tables and customers arrive. Once the cafe bustles with laughter and conversation,  I step out of the shadows and onto the terrace.

The regular customers are in their places sipping aperitifs when I pass through, rippling the air and disturbing pungent trails of cigar smoke. On the way toward my favorite table near the cafe entrance, some of the men glance at me, but these are only brief eye contacts. They sense I don’t belong here. I can tell from the way they pull back at my passing. The women, their hair piled high in the fashion, criticize me with side glances. I touch my own hair, a  self-conscience reflex. I’ve tried for their elegance, but it’s not so simple to mimic them, even though I’ve worked hard to do it.

The waiter knows me now. He’s at least welcoming and I detect a warm sympathy in his eyes as if recognizing broken hearts is part of his cafe duty. I’m enchanted by the way he drapes his small white towel over his arm, bows slightly, and then greets me with a melodious, “Bon Soir, Mademoiselle. L’habituel?”

He doesn’t look sour at hearing my badly accented French when I tell him, “Yes, the same.” My French vocabulary and syntax are university perfect, but I can’t conceal the rhythm of my native Dutch. That’s why I never speak to anyone except this waiter while I’m here. The curled lips of annoyance ruin the moment. I came to enjoy a sip of fine Cognac, this golden mood of Arles captured long ago by one of my most famous countrymen.

The waiter sets my drink in front of me and I inhale its rich aroma. As I lift the Cognac to my lips, a man steps across the cobblestone street and heads my direction. I take in a sharp breath. Lars. How has he followed me? I didn’t think it possible, but he’s striding my way, an anachronism in his jeans and T-shirt. His wiry body, his determined expression plucking at old memories I’ve struggled to tuck into the past.

Without asking my permission, Lars takes the chair across from me. “You can explain this, I suppose?”

That’s Lars. So direct. No preamble. “I can explain it no more than you can.” I sip from my glass suddenly needing fortification. “How did you get here?”

“By watching and doing what you did. Staring at the picture.” He glances around, uneasy. “I assume you felt the pull of it until stepping through was unavoidable.”

He settles his stare on me again as if he’s finally taking in the way I look. “Is this a cape?” He reaches his hand toward me, but I duck out of reach. “And your hair. What have you done to it?”

“That’s none of your business.”  I speak lower, but my voice has sharp edges that were honed by my bitter breakup with Lars last year. He made it clear that marriage and children were off the table. And when I was quite honest and told him that marriage and children were what I needed to make my life complete, he left our bed without a word. The next day he took back his ring. We continue to work as archivists together, but the rancor never lessens between us. “There’s no crime in my being here. I’ve finished my work. The museum’s closed. I’m on my own time, if I’m not mistaken, so I can dress any way I wish.”

The couple at the nearest table whisper to each other and point at Lars. “You’d do better to try to fit in,” I tell him.

He smiles. “You’re right, of course. And anyway I like your period look.” He leans across the table and his breath brushes my cheek. Too close. “There’s nothing wrong in admiring the art, but invading it…that’s unnatural.”

“And your arrival isn’t?”

He ignores my question. Another of his traits. “And I’m sure this isn’t  the first time,” he says.

I push slightly back in my chair and look out across the cafe terrace, sad that Lars has found me, sad he’s stolen this pleasure from me. Hasn’t he stolen enough from me already?

It troubles me that I’m not the only one who can come to this cafe. It was so special—my reward after a day of looking at beauty from the outside. I could for a short time slip inside and be at one with a great creation. I could rub against the soul of the artist himself. His loneliness a comfort for my own.

“Yes. I come often. I’d stay if I could.” I hold my cell phone so no one can see it and check the time. I have only a few more minutes before I have to leave.

In my early visits, I discovered I had a precise ten minutes to live in this world that Van Gogh conjured onto the canvass. Staying longer agitated the cafe customers, and even the waiter grew restless. The starry night turned threatening. “Leave,” it commanded. “You don’t belong here.”

Lars says my name in that soft way he used to and puts his hand on mine. “I followed you because I was curious, but now that I’m here, I know I followed you for a different reason. I’ve been thinking about us, about how I miss being with you.” He glances at our hands. “Like this.”

The warmth of his touch brings back other moments we’ve had together, and I can’t pull away.

Since his French extends only to simple phrases, Lars looks to me for a translation.

“It’s from The Little Prince.”Love does not consist in looking at each other, but rather in, together, looking in the same direction.”

I slip my hand free from Lars, and mouthing “Merci” to the waiter,  leave a generous tip before stepping onto the cobblestones.

Leave a Reply to dolorah at Book Lover Cancel reply