Thanks Lee for hosting me today. And thanks everyone for stopping by. As a writer, you can find inspiration anywhere and everywhere. My wife belonged to a Bible study group and one of the books they went through was Bad Girls of the Bible. I flipped through it a few years ago and sure enough there were some really Bad Girls doing really bad things. Some were repentant while others met a terrible death. I thought this would be a good topic as the thirteen antagonists in Salem’s Daughters are all Bad Girls.
Potiphar’s Wife: Her name doesn’t appear in the Bible but this wild woman was bad news for Joseph. Sold into slavery by his brothers, Potiphar bought Joseph to be a household slave. Potiphar was ‘Captain of the Palace Guard’ and his title giving reference to butcher or executioner. 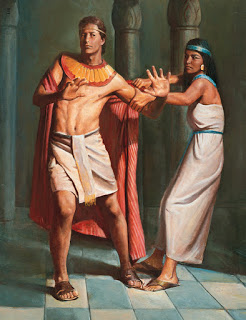 And his wife had the hots for Joseph.
She caught him by his cloak and said, “Come to bed with me!” But he left his cloak in her hand and ran out of the house. Genesis 39:12
Joseph ended up spending many years in the dungeon on her false accusations he came on to her before being released and rising to second in command in Egypt.
Delilah: She betrayed her husband Samson for money and he ended up a prisoner of the Philistines who blinded him. Samson did get his revenge by collapsing a stadium full of Philistines.
Rahab: A prostitute, she helped the Israelites capture the city of Jericho she lived in. In exchange, her life and those of her family were spared for her cooperation. 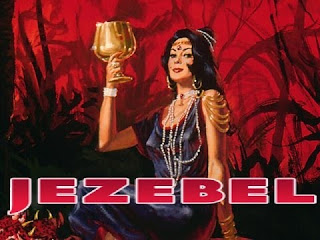 Jezebel: Often the measuring stick for bad girls everywhere. She incited her husband King Ahab to worship false deities, persecute the true prophets, and brought false witness against common folk and had them killed. Her ultimate demise: she was thrown off the top of a tower by members of her own court and ended up in a big splat where wild dogs ate her.
Mary Magdalene: She had seven demons cast out of her, was repentant of her sins, and followed Jesus. She is commonly portrayed as a prostitute but her lifestyle was never spelled out specifically. She is mentioned twelve times in the Gospels, more than most of the disciples.
Sapphira: She and her husband Ananias were killed suddenly after lying to the Apostles about money. 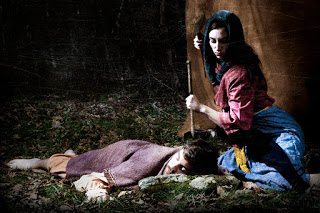 Jael: She was actually a good person as she killed Sisera to deliver Israel from the troops of King Jabin. She was more of a bad-ass than bad.
“Then she went softly to him and drove the peg into his temple until it went down into the ground while he was lying fast asleep from weariness.” Judges 4:21.
Well done, Jael. Well done, indeed. 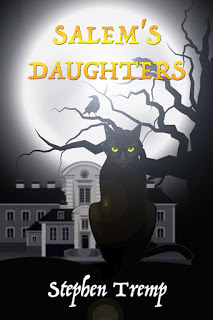 Question: Do you have any favorite ‘Bad Girls’ regardless of the source?
Short Blurb: A four hundred year old evil is unleashed when the daughters of those killed during the Salem Witch Trials find a new generation of people to murder at a popular modern-day bed and breakfast.
Stephen Tremp writes Speculative Fiction and embraces science and the supernatural to help explain the universe, our place in it, and write one of a kind thrillers.
You can read a full synopsis and download Salem’s Daughters by Clicking Here.
Stephen Tremp posts weekly blogs at his website Breakthrough Blogs.
Next Stop: Wednesday November 11th with Michael Di Gesu at In Time.