Hi readers, I hope you’ll welcome Danika Dinsmore who’s here to tell us about herself and give us an idea about her new book, The Ruins of Noe. 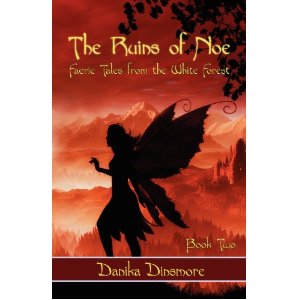 Tell us a little bit about yourself, Danika. Readers often wonder what writers do besides pull together stories.

I grew up in the San Francisco Bay Area, but now live in Vancouver, BC with my husband and our 18-pound (it’s true) feline. We call him J. Fredrick Hoover (cuz he’s a vacuum when it comes to kitty kibble). I didn’t even consider becoming a children’s novelist until my mid-30’s. Before that discovery I was building my career as a screenwriter/filmmaker and before that I was a performance poet and director of two literary non-profits. Through all of that I’ve always been a teacher. I’ve taught in public and alternative schools, as an artist-in-the-schools, for festivals and conferences, and as a contract instructor at the college-level.

Other than writing and teaching I love to travel. I’ve been to twenty different countries besides the U.S. and Canada and it feels like the tip on the iceberg. My goal is to merge these three loves.

Check out the trailer for Brigitta of White Forest, the first in the book Faerie Tales series.

Can you give us quick summary and maybe a brief excerpt of your book, The Ruins of Noe?

The Ruins of Noe picks up several months after the first book ends. Brigitta has just started her apprenticeship with the Elders when a child is born with no destiny: one of many signs that the White Forest faeries have lost touch with the Ethereals, the Ancient Ones. Without their protection, the forest will lose its balance and fall prey to the outside world.

High Priestess Ondelle is convinced by an old proverb that Brigitta is fated to travel to the former home of the Ancients to help her find the answer. But when they get there, they discover that hundreds of years ago, when the faeries were moved north to the protected realm, some faeries were left behind.

Brigitta and Ondelle are caught in a dangerous feud between two factions of feral faeries whose leaders will stop at nothing to access what little sorcery Noe has left.

What triggered the idea for this book?

I originally wrote the first book in the series as a one off, but once I had written my world book (i.e. where I keep track of the history of my imaginary world) I realized there were more stories to tell. And thank goodness, because creating a world is a lot of work. It’d be nice to keep it around for a while.

While writing all the backstory for the faeries, I discovered that there were deeper mysteries to solve, and a chaotic world to unite. That inspired me to see this as an epic quest coming-of-age story. The outline for the series came fairly easily after that.

In this story, I really wanted Ondelle as a major character. She was introduced in the first book, but we don’t know much about her. The third book will reveal how Briggy and she are connected. Her life is more entwined with Brigitta’s than I let on in the first book. But I needed readers to care more about her, so they became traveling companions in book two.

I think the most enlightening thing one learns as a writer is “if you build it, they won’t necessarily come.” No matter how passionate you are about your story, it doesn’t mean anyone else will be. One of my first bookstore readings had 6 people in the audience and one was my publisher and one was the dude who set it up. Ego check.

But the people who did come were attentive and asked great questions and I gave it my all. That’s when I came up with the mantra “one fan at a time” and became grateful for each new reader. (that and I like to repeat Dory’s phrase from Finding Nemo: Just keep swimming.)

The other day I was making a to-do list (I am the list queen). After I was done, I looked it over and realized every item had to do with my children’s writing career in some way, shape, or form. As impatient as I get, I realized I was living the writing life! That THIS – the writing plus everything on that check list, no matter how menial the task – is the writing life. That was an important revelation.

Any other books in the offing? Can you give us a sneak preview?

Right now I’m supposed to be finishing book three for a Fall 2013 release, but I’m actually working on a rewrite of a YA pop space opera called Intergalactic. It’s very different from my White Forest series, which is a nice break for me. It’s a humourous satire about a fading Intergalactic pop star. Sort of Douglas Adams meets Lady Gaga.

Here’s the summary from my website, faerie tales from the white forest.

When 17-year-old fading intergalactic pop star idoLL starts her 12-planet tour, her biggest worries are that rising star 16-year-old Jettison Prix has overtaken her on the T.R.E.N.D. charts and that her manager has booked her some really lame gigs.

But when Princess Tarantella of the planet Rethula stows away on her tour ship, inadvertently igniting an interplanetary war, idoLL finds herself stranded without her bandmates: Monkey, the cultural liaison and synth robot, and Debop, the enigmatic alien sextapus percussion wiz.

Lost without her crew, the high-maintenance diva must take things into her own incapable hands and partner up with her nemesis Jettison Prix in order to save the princess, stop the war, and track down her scumbag manager who has disappeared with all her tour money.

6. Here are some rapid fire questions for you. It’s okay to hedge if you have to.

7. Is there any advice you’d like to leave for the readers?

Thanks, Danika. I hope your blog tour is wildly successful. Appreciated your being here to brighten the Write Game.

Readers, here’s where you can find Danika’s book on Amazon and on Barnes & Noble. It would be great if you’d give her blog The Accidental Novelist and her fb page a visit.