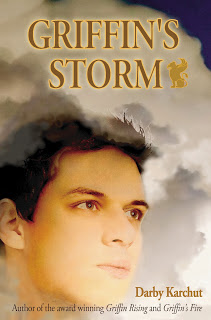 For centuries, there have been rumors about a lowly caste of supernatural beings known as the Terrae Angeli. Armed with the power to control Earth, Fire, Wind and Water, these warriors and their apprentices clandestinely serve as guardians for humans in danger.
An old enemy returns. A new alliance is formed. And Griffin finds himself in the eye of the storm when an ancient racial hatred is set loose, jeopardizing the very existence of the Terrae Angeli.
Once again, the teen guardian angel is forced to battle his worst nightmare. But this time, Griffin comes back swinging. With a vengeance.
After all, an eye for an eye…
About the Author:
Darby Karchut is an award-winning author, teacher, and a compulsive dawn greeter. She lives in Colorado with her husband and owns more backpacks than purses. As she should. Her YA books include Griffin Rising (2011 Sharp Writ YA Book of the Year) and Griffin’s Fire. Her debut Middle Grade novel, Finn Finnegan (Spencer Hill Press) will be released March 2013. The next book in the Finnegan series, Gideon’s Spear (Spencer Hill Press) will be released February 2014.
Be sure to visit Darby’s WEBSITE and say hi to her on her blog BLOG.
Her CONTACT.
Title: Griffin’s Storm (Book Three: Water)
Series: Griffin series #3
Author: Darby Karchut
Publisher: Copper Square Studios, LLC
ISBN: 978-0-9741145-5-2
Release date: December 2012
Format: Paper, e-book