I’m off to Corpus Christi, Texas in a few days to be at the Teen Bookfest By the Bay with a lot of other YA authors. Some writers from UnCommonYA. and of course, my fabulous crit partner, Yvonne Ventresca. I always get excited when I’m going to meet other writers, especially those I share my writing process with. Yvonne is the only crit partner I haven’t met in person, so this is going to make the event very exciting. I’ll post about it.

Now I’ve decided to jump into Yolanda and Denise’s February WEP, Valentine’s Lost and Found. This is a bit early, but hope it’s okay because I’m still trying to stick with my Post On Mondays Only policy.

Jolly was my first dog. He is still the dog that has my heart and always will. We grew up together. I remember when I got into serious trouble with my gram and Jolly would stand at my side while she scolded me—her corporal punishment was shaking her finger in my face until my eyes crossed. Then I had to go to my room for decades. Well, not decades, but at eight, the hour of confinement was long enough for world wars to be fought and won or lost.
Jolly stuck with me during those decades. He’d say things like, “You’re my girl. You’ll be just fine, and all is going to be great in a short time. Besides, I’m here with you. Let’s just cuddle.”
So we did.
Then when I was thirteen, my mom and gram decided I needed to visit the homeland. They shipped me off to Kansas where their roots were, but where I was the stranger in a strange land. I wrote and called home a lot—mostly about not being a fit for Kansas and missing Jolly. It wasn’t natural being away from home or him.
In each conversation with Mom and Gram they said all was well, not to worry.
“He’s a bit mopey, but gram and I are walking him.”
”Jolly’s fine, honey. Enjoy your visit.”
“I brushed him today and told him you’ll be home in a couple of weeks.”
When I made my last call, the news wasn’t that cheery. Jolly had some problems. I begged to come home immediately, but my return airline ticket was already purchased. I could come back in a few days, just not that day.
When I finally set foot on native soil again, I ran up the ramp and to my family. I fully expected they would smuggle Jolly into the airline terminal, but there were only two humans to greet me—two humans with grief all over their faces.
They didn’t have to tell me I’d never hold Jolly again, that he’d never curl up next me with warmth and encouragement. I knew. I also knew they’d done their best to save him, but I had this terrible gash inside me that none of my family could ever stitch up.
All I could think was that his girl hadn’t there when he needed her, and his girl has always regretted that.
This is for Jolly, the dog I loved and lost. His name suited him. 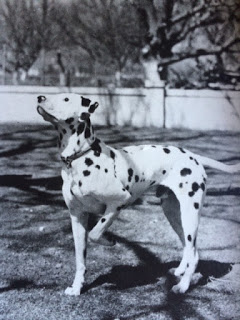 Quote of the Week: “A man is only as good as what he loves.” Saul Bellow