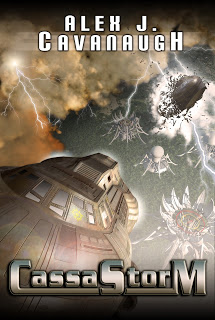 CassaStorm
By Alex J Cavanaugh
From the Amazon Best Selling Series!
A storm gathers across the galaxy…
Commanding the Cassan base on Tgren, Byron thought he’d put the days of battle behind him. As a galaxy-wide war encroaches upon the desert planet, Byron’s ideal life is threatened and he’s caught between the Tgrens and the Cassans.
After enemy ships attack the desert planet, Byron discovers another battle within his own family. The declaration of war between all ten races triggers nightmares in his son, threatening to destroy the boy’s mind.
Meanwhile the ancient alien ship is transmitting a code that might signal the end of all life in the galaxy. And the mysterious probe that almost destroyed Tgren twenty years ago could return. As his world begins to crumble, Byron suspects a connection. The storm is about to break, and Byron is caught in the middle…

What Some Are Saying:

“CassaStorM is a touching and mesmerizing space opera full of action and emotion with strong characters and a cosmic mystery.” – Edi’s Book Lighhouse

“Cavanaugh makes world building on the galactic scale look easy. The stakes affect the entire known universe and yet Cavanaugh makes it intensely personal for our hero. The final installment of this series will break your heart and put it back together.”
– Charity Bradford, science fantasy author of The Magic Wakes
“With a talent for worldbuilding and a compelling cast of characters, Alex J. Cavanaugh combines high powered space battles and the challenges of family dynamics to provide readers a space opera with heart.”
– Elizabeth S. Craig, author of the Southern Quilting and Myrtle Clover mysteries

A few weeks ago I sent Alex this question: Is there a chance we’ll see Bassan as a young scientist, saving the universe, but not like his father did?
Here’s his answer:
I can picture what Bassan would be like as a young adult and could easily write short stories that feature him, but not sure I could pull off another book. Besides, I am content to end this storyline now. Maybe I could hold a fan fiction contest and let readers come up with their own versions of Bassan’s future?

I’m supposed to be on break, but I’d promised Alex to post about his book, so this is my September EXCEPTION POST. And since it’s Friday here’s my Small Things Celebration post as well.
My break is a small thing, but it has been very big for me. I managed to list my mom’s house with a realtor, set up an estate sale and see that she was in a facility where she could get the best daily therapy. She’s improved a lot with the care she’s getting. So my celebration has everything to do with all of that.
Then, in the middle of all this. . . well, I’ll keep that for when I return to blogging in October!
In the meantime, here’s that infamous Linky List. Go see what others are celebrating.