The Cigar Factory seemed to be women’s work, and while they worked, some enjoyed a cigar.

Answers to B: What do you know about Began, Burma?

NOW what do you know about cigars?

T/F 1. The Burmese facial feature is called a cheroot.
T/F 2. Some Burmese cigars are rolled in dried banana leaves.

Curious About the Kargrandes?
What are the Kargrandes? This has been the ongoing question for the past twelve weeks. Ever since I launched the website http://whatarethekargrandes.com/ and started sending out Tweets with #whatarethekargrandes, people have been trying to guess. What are they? What role do they play in my book Dragon of the Stars, coming out April 7?
We’ll focus on their inspiration. One of the hints states that the Kargrandes are suited for a harsh environment. I needed a life form that could withstand extremes and adapt to new surroundings. Believe it or not, there is a real life creature like that – the Tardigrade. It can survive being frozen and boiled. It can live without water and has even survived space radiation. While not quite as tough, I did take inspiration from the Tardigrade, down to giving the Kargrandes a similar name.
What are the Kargrandes though? For more hints, visit http://whatarethekargrandes.com/. Otherwise, you’ll just have find out on April 7 when Dragon of the Stars is released! 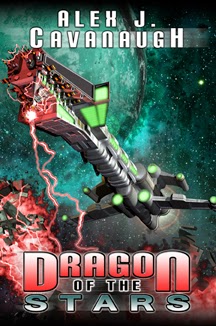 Dragon of the Stars
By Alex J. Cavanaugh
Science Fiction – Space Opera/Adventure/Military
Print ISBN 9781939844064 EBook ISBN 9781939844057
The ship of legends…
The future is set for Lt. Commander Aden Pendar, poised to secure his own command and marriage to the queen’s daughter. But when the Alliance declares war on their world, Aden finds his plans in disarray and told he won’t make captain. One chance remains–the Dragon. Lost many years prior, the legendary ship’s unique weapon is Hyrath’s only hope. Can Aden find the Dragon, save his people, and prove he’s capable of commanding his own ship?
Pre-order:
Amazon Barnes and Noble Kobo
Chapters
Amazon UK
Goodreads
Alex J. Cavanaugh has a Bachelor of Fine Arts degree and works in web design, graphics, and technical editing. Online he is the Ninja Captain and founder of the Insecure Writer’s Support Group. He’s the author of Amazon Best-Sellers CassaStar, CassaFire, and CassaStorm.
BLOG  IWSG  TWITTER